Personalities in Strata: The Bush Lawyer 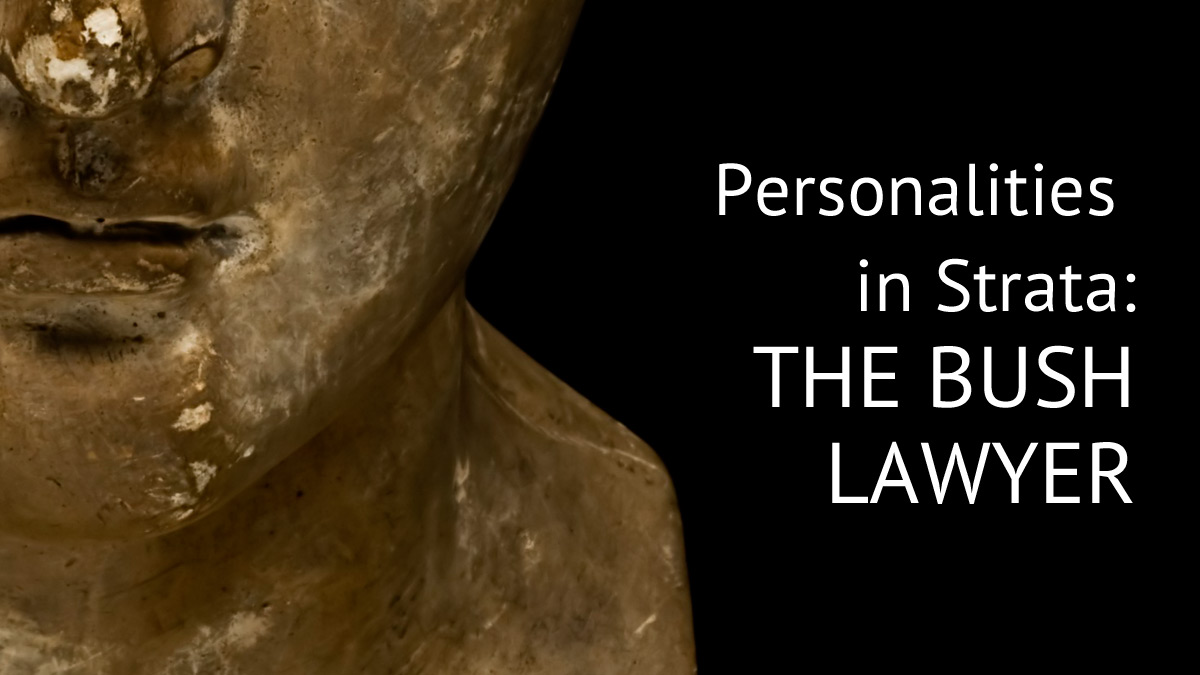 In the first of the Strata Solve series, get to know our favourite pseudo lawyer…

Knowing just enough about Strata Law to be a danger to themselves and others, the Bush Lawyer is not a legal practitioner (although they may have done one or two semesters of law or a related subject), or they might have expertise in a regulatory environment. While the Bush Lawyer has reasonable knowledge of Strata, their perspective tends towards black and white interpretation, rather than the nuance which is characteristic of Strata Legislation. Legislative references might often be out of context or without further reference to a related provision.

Catch cry: a phrase that sounds vaguely Latin, or something they have taken out of context from an order or judgement. It might also be misspelled…

Red Flags: if you hear these things said, you might have a Bush Lawyer involved

The Good: at least the Bush Lawyer takes the time to be engaged with what is going on in their scheme. Not only that, the Bush Lawyer usually reads things in detail and over a period of time, this means they get a good working knowledge of Strata issues.

The Bad: even the most informal communications get bogged down in unnecessary (and frequently, wrong) references to Legislation and Caselaw. The Bush Lawyer quickly can take things off into tangents which detract from a scheme’s priorities.

Making the Bush Lawyer Work For the Scheme: utilise their obvious enthusiasm for the issues by getting them engaged with research tasks. For example, the Bush Lawyer would likely be very excited by the prospect of looking into some recent Adjudication Orders about By-Law disputes, to assist the committee in a current By-Law issue.

What Can We Do When It Becomes a Problem? The worst thing you can do is engage in a Legal tete a tete with the Bush Lawyer: after all, that is what they want. Instead, be sure to acknowledge their contributions, as if nothing else, this gives pseudo credence to their arguments (and the respect they probably crave). Finally, make sure that proper Strata Governance and process is followed at all times, because this is something the Bush Lawyer will cast an eagle eye over: you can bet that if a step is missed or corner cut, the Bush Lawyer will be on to it.

Oh, and of course: seek your own qualified Strata Legal advice where you need to, rather than relying on unqualified or bushy advice.

Fun Fact: we think an actual Legal practitioner can be a Bush Lawyer. Strata Law is incredibly specialised and can take a lot of getting used to. Someone who has practised in another type of Law does not necessarily make for a sensible or logical practitioner of Strata law. Communications on their firm’s letterhead, even when it is a personal strata matter, can be indicative of a Bush Lawyer-esque problem.