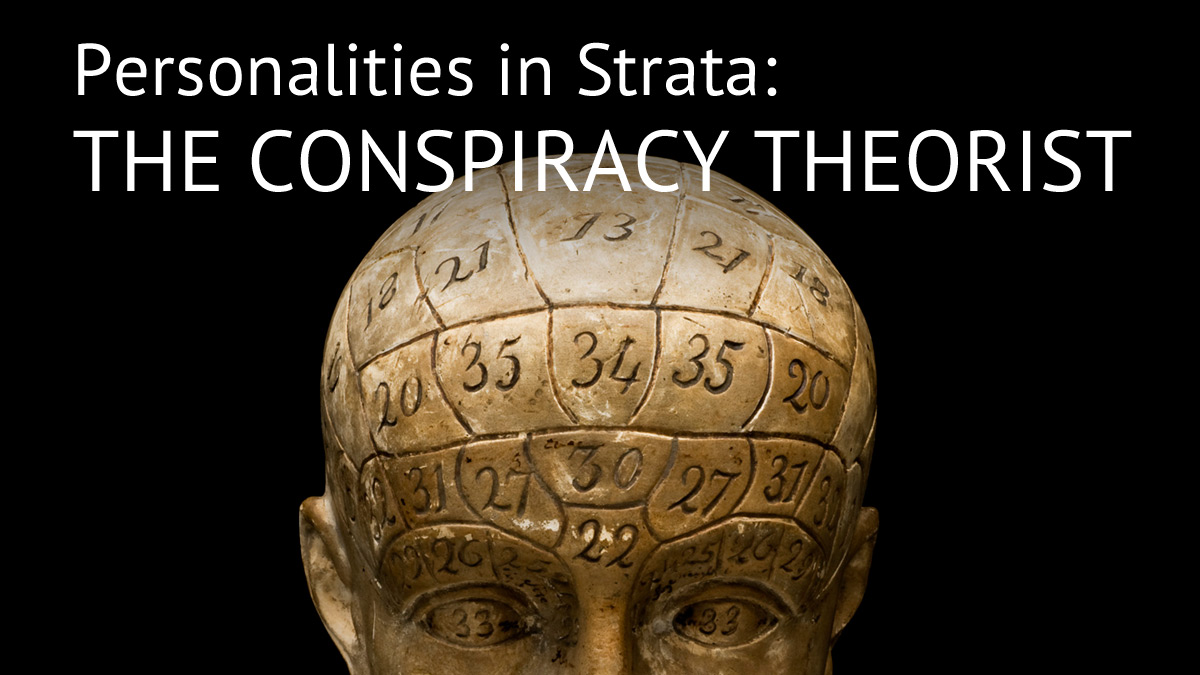 Committees, caretakers, strata managers, lawyers and government are all in on a giant conspiracy to grind them into the dust. So thinks the Conspiracy Theorist, who will not be denied on their strata quest, because they can see ‘the truth’ where no one else can (or will).

Catch cry: ‘There should be a royal commission into strata’

The Good: you have to admire both the passion and resilience of the Conspiracy Theorist, as it takes considerable reserves of energy to maintain their position, especially in the fact of compelling evidence to the contrary. It may be the Conspiracy Theorist provides a strata scheme with a good reminder to pause and reflect upon processes and decision-making. There will likely be no conspiracies at play, and yet, perhaps the Conspiracy Theorist has a point about something which has gone amiss.

What Can We Do When It Becomes a Problem? As is the case with some of the other Personalities in Strata we talk about, the Conspiracy Theorist takes considerable fuel from the reactions and responses of others. Simplistic as it sounds, by not responding in kind – or at all – others at the scheme can dampen the intensity and breadth of the Conspiracy Theorist, minimising their negative impacts. Managing communications with the Conspiracy Theorist can be a long yet worthy project.

Fun Fact: the Conspiracy Theorist is driven by the idea that maybe, just maybe, everyone else has it wrong and they – little old them – has the insight to see what is really going on. There is more than a hint of narcissism in that. There is also the chance the Conspiracy Theorist feels unsure, anxious and doubtful and their theories are their defence mechanism. Those are two very different personality traits, adding more complexity to an already complex scenario.

Think You May Be a Conspiracy Theorist? Here is a reality check for the Conspiracy Theorists out there: it takes an extraordinary combination of planning, cooperation, resources, time, and in many cases, unfathomable luck and coincidence to pull off a conspiracy. If, for example, you think the government is conspiring against you, we can tell you for a fact that most governments are stretched simply to provide basic services, and that a conspiracy is way, way beyond their capacity to brainstorm, let along implement.

Can Strata Solve Assist? Sure can! Drop us a line to see how we can assist with this and related strata issues.